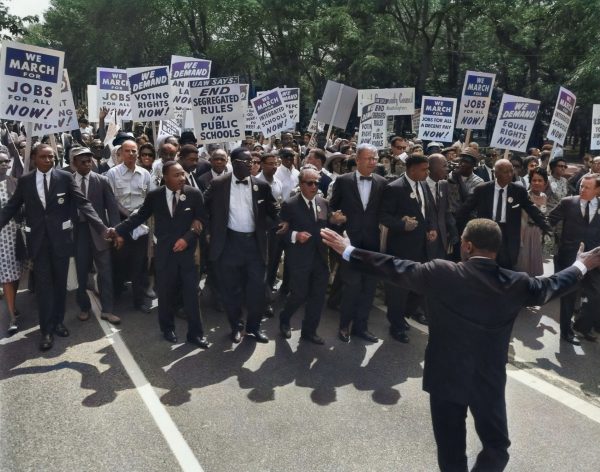 from our denomination – Presbyterian Church USA

On Aug. 28, 2020, the Presbyterian Church (U.S.A.) will be joining #Give828, a national day of giving focused specifically on supporting Black-benefiting organizations. #Give828 isn’t like other fundraising campaigns. This day takes place during Black Philanthropy Month and commemorates multiple important historical landmarks in Black Americans’ march toward freedom. Did you know that on:

Your gifts to #Give828 will go to support leadership development for leaders of color by funding the Katie Geneva Cannon Scholarship and the Conference for Seminarians of Color. Donating to the campaign is one of the action steps you can take as a part of the Presbyterian Week of Action, Aug. 24–30. Go to pcusa.org/weekofaction for more information on the Presbyterian Week of Action.

Aug 28 is the anniversary of the 1963 March on Washington for Jobs and Freedom.  Organizers A. Philip Randolph and Bayard Rustin worked tirelessly for nearly two years, eventually convincing the National Association for the Advancement of Colored People and the Southern Christian Leadership Conference to set aside their differences and join the effort.

When the day came, thousands poured into the city from all over the country, coming in by bus, train, car, and plane.  Chicago and New York officially declared August 28 “Freedom Day,” and gave workers the day off.  On the other hand, many feared the march would become violent; the Pentagon put 19,000 troops in the suburbs, just in case.

But in the end there was no violence (indeed, there wasn’t a single arrest!).  The marchers peacefully sang and chanted all the way to the Lincoln Memorial, where the 16th speaker that day, the Rev. Dr. Martin Luther King Jr., delivered what would become one of the most celebrated pieces of oratory in American history, part sermon, part rallying cry.  Most of the speech revolved around the idea that America has not yet made good on the many promises it has given African Americans; the country has thus far defaulted, King declared, on that “promissory note.”

The renowned gospel singer Mahalia Jackson had sung “How I Got Over” just before King spoke, and earlier that summer, she had heard him deliver a speech in Detroit that featured the stirring “I have a dream!” refrain.  And so that day in August on the steps of the Lincoln Memorial, as the young preacher neared the end of his remarks, Jackson called out to him, “Tell them about the dream, Martin!” – and King responded, extemporaneously delivering the words many Americans now know by heart, ending with these: