James Glazebrook Billingsley
May 30, 1931 – August 4, 2022
Tacoma, Washington – James Glazebrook Billingsley died peacefully at home on Thursday, August 4th, 2022, surrounded by his loving family. He is survived by his wife of 70+ years, Nancy May Billingsley, and more than 35+ family members including children and their spouses, grandchildren and great-grandchildren. We are filled with gratitude for his amazing 91 years as a profound source of acceptance and unconditional love. His service made the world a better place.
James was born May 30, 1931, in De Queen, AR. He entered the University of OK at 16 as an ROTC candidate, and graduated in 1952 with his BS, and his M.D in 1955 from the University of Oklahoma, School of Medicine.
While in the service, he worked at Fitzsimmons Hospital near Denver Colorado, and later at Madigan Hospital at Fort Lewis, where he established the Pulmonary Function Clinic. He was also active in the community directing choirs, musicals, and other events.
He joined St. Joseph’s Hospital as a pulmonary specialist, and retained a private practice in some form until 2016. His role at St. Joseph’s evolved until he became the CEO, Medical Affairs for St. Josephs, St. Clair’s, and St. Francis. He served Franciscan Health for 54 years.
In the late 60’s he saw a gap in emergency services in Tacoma. He approached the fire department to establish such a service, and was able to help the Tacoma Fire Department implement the program. He started the paramedic training program in 1973 and continued to play an instrumental part in the program until he retired in 2016.
Nothing gave James more joy than time with his family filled with discussion, stories, and laughs. He savored our annual family fishing trip for the same reasons. James believed we are all part of God’s family, and we are all His children. He thrived on his deep love for Nancy and family, which nourished his soul. We will all miss him. 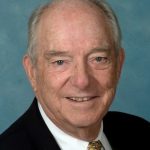 In lieu of flower we ask that donations be made to the Firefighters Charity Fund.
FIREFIGHTERS CHARITY FUND attn: Matt Frank
1109 S 50th Street
Tacoma WA, 98408

Please find the Venmo information below.