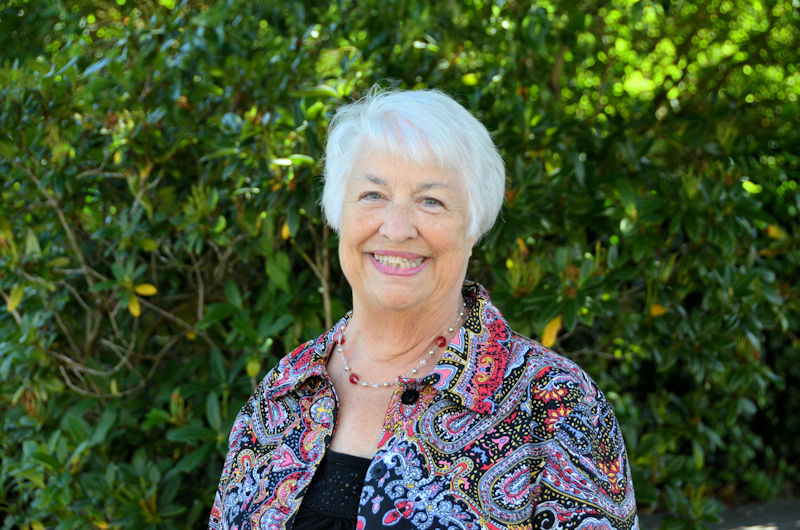 We all know Pat’s heart and soul always has been and always will be here at Immanuel. We also know that due to her wonderfulness there will be a lot of people who want to celebrate her life. After much discussion it was decided that to provide the best hospitality to all who would want to attend, a bigger space would be necessary. So, we will bring IPC spirit and love to Mason United Methodist Church on Friday, August 10 at 2 p.m.

Reception will be held immediately after the service at the Hotel Murano on the 4th floor (Bicentennial Pavilion). 1320 Broadway.

Patricia “Pat” Flynn Pat Flynn, long-time civic leader, died peacefully at her home of 54 years July 7th, 2018 of kidney failure surrounded by family and friends. She had just celebrated her 80th birthday on June 7. In the weeks preceding her passing, Pat was visited by and talked to hundreds of friends and familyvisits that she truly valued, enjoyed and appreciated. Pat was born in Tacoma and raised on Day Island. She attended Clover Park High School and graduated from Queen Anne High School in Seattle. She attended the University of Washington and Green River Community College. She retired from the City of Tacoma as a Community Relations Specialist. Prior to that, she served in the Tacoma School District’s public information office for 23 years, served as an elder and Clerk of Session at Immanuel Presbyterian Church and sang in its choir for more than 50 years. She was a member of P.E.O, Chapter C. As a citizen, she led the successful campaign to have Tacoma named an All America City in 1984; as a City staff member she advised and accompanied the group that won the honor again in 1998. She served for 25 years on the board of trustees of the Municipal League of Tacoma-Pierce County. The Muni League named her a Distinguished Citizen and the winner of the Elsie Strobel Volunteerism Award. Her long-time interest in the election process served Pierce County well. As a member of the voter system review committees during the mid ’80s and early ’90s, the group changed Tacoma’s way of voting from outdated lever machines to the more modern scan variety. She was a founding member of City Club, past president of her collegiate Delta Gamma alum group, and served on the Delta Gamma (Beta Chapter-U of W) house corps board. In 2006, Pat received Delta Gamma’s highest award for an alum who has made a significant contribution to the nation for her volunteer work with Relay For Life. Tacoma Rotary 8 also honored her for her work with Relay with a Paul Harris Fellow; the City of Tacoma honored her with a City of Destiny Award in 2007. She is best known for her work as an American Cancer Society volunteer. Pat helped Relay For Life founder Dr. Gordy Klatt bring the 24-hour Relay For Life to Tacoma, the nation and the world in the mid-’80s. She currently served as an honorary life member of the national Relay Advisory Team. She was inducted into the ACS’s national Relay Hall of Fame in Atlanta, Ga. in 1998, and received the prestigious St. George Medal from ACS in Denver in 2009. She was predeceased by her husband of 50 years, Mike, in 2008. She is survived by three sons, Michael John (Jean), Mark Douglas of Tacoma, and Kelly Patrick (Jennifer) of Las Vegas, NV; brother Ted Wilcox (Marlene) of Shoreline; sisters-in-law Kay Flynn Rich (Bill) of Bellingham, and Margaret Wilcox of Edmonds; 15 grandchildren; and several nephews and nieces. She was preceded in death by her parents, Betty and Horton Wilcox and her eldest brother Horton (Mike) Wilcox. Pat was deeply committed to Immanuel Presbyterian Church. Due to size limitations Mason United Methodist has generously offered to hold her service. The memorial service will be conducted at 2 p.m. Friday, August 10th at Mason United Methodist Church, 2710 N Madison St., the Rev. David Brown of Immanuel Presbyterian Church officiating. Additional information regarding a reception to follow the memorial can be found at patflynn.org or Pat Flynn’s Facebook page. The family wishes to thank Drs. Neil Hannigan, Ted Lau, Paul Schneider & Duane Githens for their years of caring for Pat as well as Franciscan Hospice Care. In lieu of flowers, the family suggests remembrances be made to Relay for Life and can be made online at patflynn.org, or ACS 1313 Broadway Ste 100, Tacoma 98402 or to Immanuel Presbyterian Church 909 N J Street, Tacoma 98403.